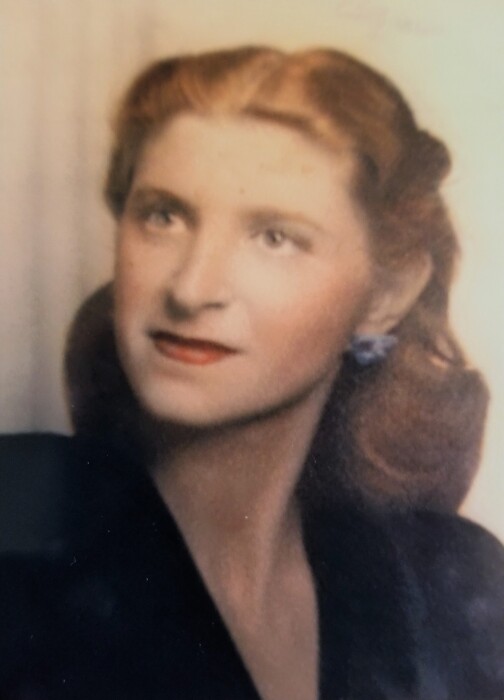 Agnes Mary Coan of Rio Rancho, NM, died peacefully on March 17, 2022. She was born January 8, 1924, in Philadelphia, PA to Veronica (Vera) Webb and Philip Evanoff, English and Bulgarian immigrants.  She had four brothers and three sisters whom she cherished.

Agnes graduated from the Charles E. Ellis School for Fatherless Girls in Newtown Square, PA, where she received an excellent education that she appreciated her entire life.  It was desert love at first sight when she arrived in Albuquerque in 1953, on a road trip with brother Philip to find a dry climate for their asthmatic mother.  She worked 25 years at Ed Black’s Chevrolet in Albuquerque while caring for her mom.  In 1978, she reconnected with childhood sweetheart, Robert Walter Bacher, married him and moved to Springfield, Pennsylvania.  Bob’s children, Bobby, Mary Ann and Nancy, welcomed her into their family with kindness and love.  After Bob’s untimely death, she married John Joseph Coan in 1991.  She returned to NM in 2015 after John’s death.

She was smart, tidy, disciplined, curious, self-reliant and in perpetual motion for all her 98 years. She had a great sense of humor and laughed easily at herself and the folly of the world. She loved the outdoors and reveled in the beauty of the Southwest.  She was a dancer, geography buff and devoted Catholic who prayed often to St. Anthony (patron saint of lost objects) in her later years. She was especially grateful for the love and companionship of John Coan’s granddaughter, Leigh Nilsson, and her family in Broomall, PA.  Agnes has the undying love and affection of 16 living nieces and nephews who adored her along with just about everyone else who came to know her. She was grateful for the excellent care she received at Fairwinds Rio Rancho during the last seven years of her life and for the many friends she had there.  She would be the first to tell you that she had an excellent life with many blessings.

She is survived by her sister, Roberta Lindquist of Tucson, AZ and the rest of us who must slog on without her for a time. She chose to be cremated.  A funeral mass will be held at the San Ysidro Catholic Church, 5015 Corrales Rd., Corrales, NM on Thursday, March 24, 2022, at 10:00 AM. She will be interred at the Holy Sepulchre Cemetery, Cheltenham Township, PA.  In lieu of flowers, the family has suggested that contributions be made in Agnes’ memory to the Roadrunner Food Bank, 5840 Office Blvd. NE, Albuquerque, NM 87109.

To order memorial trees or send flowers to the family in memory of Agnes Coan, please visit our flower store.