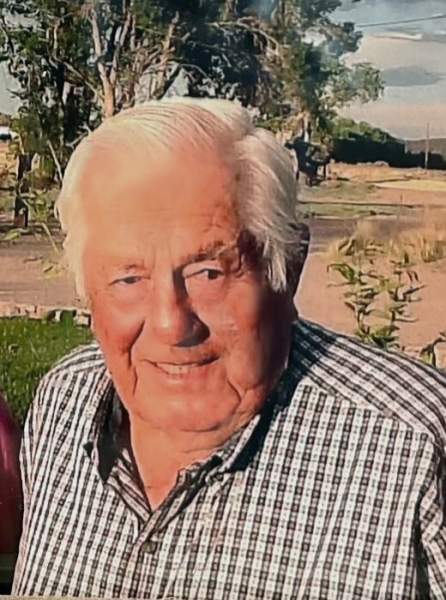 Alberto B. Bustamante, 93, of Polvadera, New Mexico peacefully passed away at home surrounded by family on January 22, 2022.

Alberto was born in San Miguel, New Mexico on April 12, 1928, to Victor Bustamante and Librada Bejarano-Bustamante.  His love for farming began at a very young age, when he started working with his father and for area farmers throughout the Mesilla valley.  He married the love of his life Concepcion (Concha/Connie) Alvarez on April 25,1952 in Mesilla, NM.  In 1953 they moved to Escondida, NM and later to Polvadera, NM, where he and his father jointly farmed approximately 85 acres, growing cotton, alfalfa, chili, vegetables, and other fresh farm products.  Alberto produced similar products for several years on farm property he later purchased or leased. This continued until he decided to farm part time after he was hired full time by the Middle Rio Grande Conservancy District.  There, he engaged in and contributed to projects aimed at improving the efficiency of water distribution and irrigation across the district.  He retired after twenty-four years of faithful and dedicated service with them.

After retiring he resumed his emphasis on organic farming practices on 20 acres he and his wife named El Rancho de Las Rosas y Las Mariposas (Ranch of the roses and butterflies).  Among his many farming accomplishments, he was very proud of achieving certification as an organic producer from the State of New Mexico and that his products were enjoyed and promoted by many customers that purchased from him exclusively for more that 20 years.

To his entire family and numerous friends, it’s clear that Alberto believed that farming, despite hardships and disappointments, was an honest and honorable way to spend his days on this earth, that it nurtured the close family ties that made life rich in ways that money can’t buy, and that children learned values that will last a lifetime, values that can be learned in no other way.  Just as he experienced joy when watching his crops ripen in the field, he always delighted greatly watching his children, grandchildren and great grandchildren growing tall and strong and uniquely gifted, knowing that like his crops, they too were an extension of him.

Alberto was preceded in death by his parents, Victor and Librada Bustamante; son, Victor Bustamante; brother, Clemente Bustamante; and sisters Ida Rivera and Lily Lujan as well as Patsy Bustamante who he considered his sister.

Due to the current situation with COVID-19, we respectfully ask that all safety measures be taken and masks be worn by those that are able to attend, during the entirety of the service.

To order memorial trees or send flowers to the family in memory of Alberto B. Bustamante, please visit our flower store.