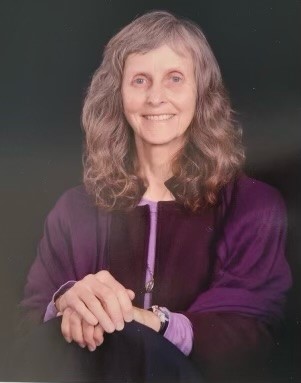 Father Young and her close friend Kit, were by her side when she passed. Her children couldn’t arrive in time but were able to tell her they loved her one last time over the phone.

Angela is survived by daughter Laura Ciaio and son in law Andrew Ciaio of New York, by son James Ashmore and daughter in law Melanie Ashmore of Texas, by son Rabananda Bennett and daughter in law Kirsten Bennett of Colorado, by daughter Francine Bennett and her boyfriend Michael of Nebraska, by sister Mary Ann Tiedeman of Illinois, by sister Cynthia Atkinson and brother in law David of Illinois, by brother James Edwards and sister in law Carmen of Wyoming.

Angela is preceded in death by her mother Othelle and father Phillip Edwards.

Angela was born on Thursday, April 24th, 1947, in Taylorville, Illinois, to mother Othelle and father Phillip Edwards. Angela received a Master’s Degree in Social Work in the early 80s, and continued to the University of New Mexico, where she completed study towards a Doctorate in Psychology, but later graduated in 1998 from the universities’ Law School with a Law Degree (JD). Angela loved her children and grandchildren. They live out-of-state, so there were visits and phone calls. Angela was a parishioner of St. Thomas Aquinas Catholic Church in Rio Rancho, New Mexico. Her daily life revolved around her Catholic faith and her sobriety. Before Covid-19 she attended Mass daily. Angela loved tie-dye clothes, traveling, and living in different places such as Europe and the Northern Mariana Islands.

I would love you, my Lord Jesus,

If there were no heaven

If there were no hell

You need give me nothing

For me to love you

For even if I would not hope for what I hope

I would still love you as I love you now.

In honor of Angela’s memory, the family asks that donations be made to Rachel’s Vineyard in her name.

To order memorial trees or send flowers to the family in memory of Angela L. Bennett, please visit our flower store.