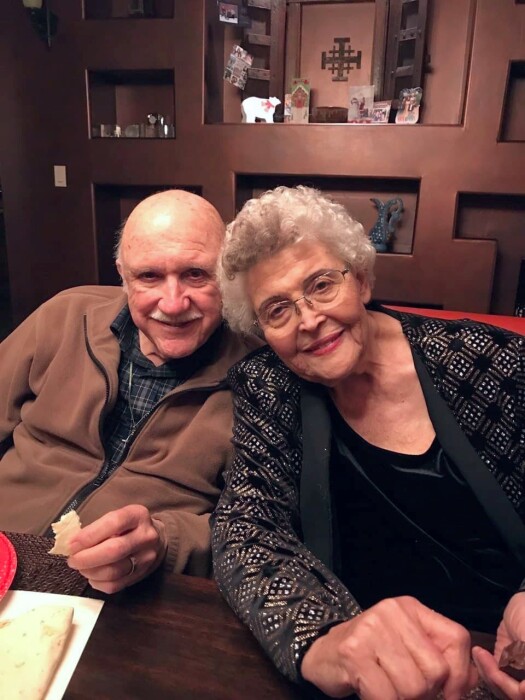 Angeline was born Angelina Antonia Sanchez at her parents’ home on June 13, 1932, in Rancho de Albuquerque to Casimiro Sanchez and Dolores Baca Sanchez. Of their eight children, she was the last surviving. After graduating from Albuquerque High School, she attended two years of schooling at Draun’s Business College. Her sister Josephine decided to enter the Benedictine Order of Perpetual Adoration Convent with her. After nine years, Angeline decided not to profess her lifetime vows and followed God’s calling to another purpose.

Her future husband, Julius Edward Sanchez, was preparing to graduate as a Registered Pharmacist when they met at a dance hosted by St. Pius X’s “Over 21 Club” in May 1962. When Julius saw Angeline enter the dance, he immediately noticed her. Fortunately, Angeline’s cousin (and Julius’ dining acquaintance) formally introduced them. After dating for three months, he asked Angeline to marry him. On December 29, 1962, they were married and remained married for 59 years. Just as they had prayed for, they had six children: Julieanne, Angela, Patrick, Robert, Theresa, and Paul. Their children have blessed them with six granddaughters: Julie, Jennifer, Sophia, Adriana, Isabella, and Lilia. To Angeline’s great joy, she also had two great-granddaughters: Morgan and Marcella.

Angeline was a devoted wife, mother, grandmother, and great-grandmother.  She loved having a house full of her children and all their friends. She was a wonderful cook, and there was always enough food to feed everyone. One of her favorite things was getting together with family and close friends to celebrate special occasions. When she hosted, there was always plentiful fun, laughter, card games, and delicious posole. Angeline loved to win, and we treasure our memories of uproarious Hand-and-Foot games that lasted into the wee hours of the morning. She was competitive and strategic, and each person could only hope to be her partner.

Anyone that knew Angeline knows that her faith was the most important aspect of her life. There was never a day that did not involve prayer: for our country and its leaders, for her family and friends, and for the church itself. Starting in 1970, Julius and Angeline became active members of Our Lady of the Annunciation Catholic Church, where Julius was an altar server and fourth degree Knight of Columbus. Though she upheld many of the traditions of the Catholic Church, Angeline understood that her personal relationship with Christ was the most important of all. When asked for advice, she would also offer to pray for you and would tell you to do the same. Her confidence that God was watching over her and her loved ones was infallible. What a blessing to have such a prayer warrior in our family!

Angeline loved babies: she had lots of babies and saved lots of babies. After having a few babies of her own, Angeline and some of her very close friends partnered with pregnancy crisis and birthing centers to help save unborn babies. Because many of these young women spoke only Spanish, these clinics had trouble communicating their resources to their patients. The ladies didn’t understand what financial and medical options were available to them, causing many to opt for an abortion. Using her fluency in Spanish, Angeline acted as a translator for the clinics and worked with them to put together financial and medical plans for their babies. She would often attend all medical visits and the birth of each child. Many times, Angeline would volunteer to provide childcare for these new mothers when they had to return to work. Until the end of her days, she was passionate and unafraid to stand up for what she believed.

On Monday, May 24, 2021, three weeks shy of her 89th birthday, God took Angeline home. She was surrounded by the people who were most important to her: her family. Julius was next to her, holding her hand, and never stopped telling her how much he loved her.

For I am sure that neither death nor life, nor angels nor rulers, nor things present nor things to come, nor powers, nor height nor depth, nor anything else in all creation, will be able to separate us from the love of God in Christ Jesus our Lord.

To order memorial trees or send flowers to the family in memory of Angeline Sanchez, please visit our flower store.