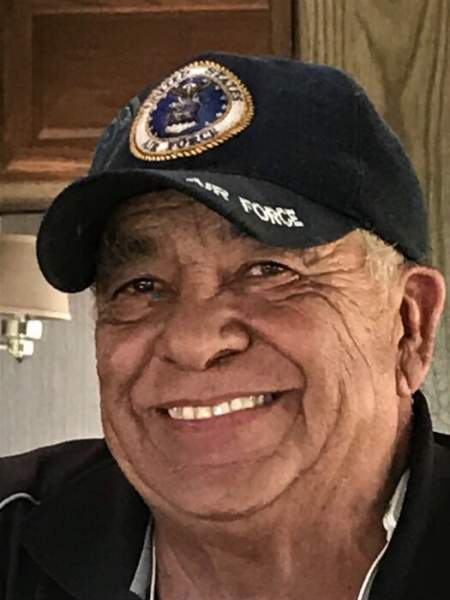 Our hearts were broken in the early morning hours of Saturday, September 18, 2021 when Covid took the life of our beloved Sam.  He was born on April 8, 1949 in Albuquerque, New Mexico to Rudolfo Gutierrez and Lena Martinez Gutierrez.

Sam was preceded in death by his parents, his father in 1994 and his mother in 1956; his brother George William Gutierrez (Billy) and sister Rose Gutierrez Velarde (Rosie) and his grandparents Epifanio Gutierrez, Agapita Aragon Gutierrez, Ramoncita Martinez and his favorite aunt Angelita Gutierrez Olivas.

Sam is survived by his life’s chosen partner Emily Kalinauskas; his son Paul and wife Ellen; his son Peter and wife Julie and all his precious grandchildren who lost their Papo:  Tiger, Lance, Emma, Paige, Ryder and Kylie.   He is also survived by his sisters Judy Casaus (Ben), Gloria Dominguez (Manny) and brother Rudy (Annie), and was Uncle Chunky to 11 nieces and nephews and several great nieces and nephews.

Sam was quite young when his mother became very ill and only 7 years old when his mother died.  He and two of his siblings went to live with his grandparents and aunt on the family ranch in La Jara, NM. He lived with his father in Albuquerque for a short while and returned to La Jara.  Upon graduation from Cuba High School he was drafted into the US Army during the height of the Vietnam War and he chose to enlist in the United States Air Force and served for 8 years at various Air Force bases in the United States and in Thailand.   Upon his return home he enlisted in the New Mexico Air National Guard (The Tacos).  One of the most intense moments was when he stood in front of the Vietnam Memorial Wall in Washington DC touching the names of the 8 crew members lost in one day when they lost a plane over Cambodia.  He made many life long friendships with all his fellow air force and guard buddies.

He was the most creative, kind, warm, generous and magnetic personality most people have ever met.  Sam had an infectious smile and laugh and gave the most wonderful hugs (when he hugged you, you knew you had been hugged). He would grab your cheeks with these wonderfully scratchy hands that we all inherited from our mother and you just loved it.  Everyone sought him out and he was always surrounded by family and his many friends.

In his lifetime he was into many things, so curious he was always making something with his hands (those wonderful scratchy hands) or inventing the next exciting thing, all so creative and amazing.  He was a wonderful father, a talented artist, jeweler, business owner and into many other endeavors, but he found his real joy when he left Albuquerque to take over running the family ranch in La Jara and become caretaker of his aunt Angelita until her death.  He was a cattle rancher but he loved all his big, monster machines and could always be found on top of something happily excavating or digging holes.   He single-handed built his beautiful and peaceful lakes and stocked them so that anyone who wanted could enjoy fishing.

Sam left us far too soon and he leaves behind his entire family to miss him.  We wish we could have had him for a while longer; his death did not have to be.  Covid is unforgiving and deadly and the pain of loss is very, very real.   Private services for family only will be held.  Sam loved his Country was a proud Vietnam Veteran and Patriot and he will be laid to rest at the Santa Fe National Cemetery at a later date.   The family hopes to be able to host a huge Celebration of his Life next summer at his lakes in La Jara with all his friends and family able to attend.

To order memorial trees or send flowers to the family in memory of Anselmo Sam Gutierrez, please visit our flower store.