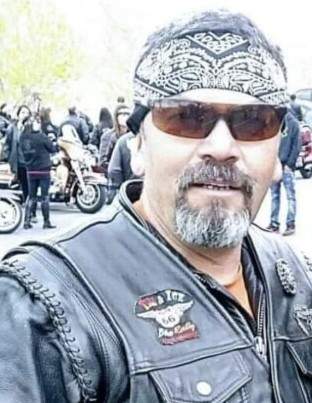 He is survived by his lovely wife of 15 years, Carol A. Flores Herrera; his mother and father, Esther and Johnny Cordova; his sisters, Darlene (Everett) Tafoya, Vivian (Agustin) Pinchera, Naomi (Richard) Cardenas, Raylene Casias, and Sona (Levi) Romero; his brother, Paco (Jessica) Cordova; his four fur babies, who were his whole world! Chloe, Chico, Harley, and Royal; and many nephews and nieces, and great nephews and nieces, too many to count but we all loved him very much.

David graduated from Taos High School in Taos, NM. Following graduation, he proudly and honorably served in the New Mexico National Guard for many years. He worked with Boise Cascade for 22 years. He was a fighter!

David also very much loved to build things and he was a jack of all trades. His work is laid out all over New Mexico. His main hobbies were building Gazebo’s, sheds, porches, you name it, and he would build it. Family and friends even gave him the nickname “Bob the Builder”.

He was just such a loving and caring person. His love for his wife, was huge! And the love David also carried for his fur babies and family was also very huge.

One thing about David, if you needed him, he was there. David had a heart of gold.

He will be greatly missed as he was the go-to person for many!