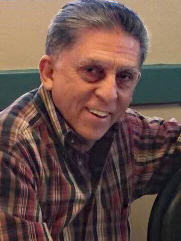 DAVID R. ROYBAL, 76, of Albuquerque passed away peacefully at home the morning of January 8, 2022, after a six-month battle with cancer. God called him home to end his suffering, and the angels came to guide him. All of us who loved him are heartbroken to lose this wonderful man. David is survived by his loving wife of 56 years, Diana Roybal; his son Randall Roybal and husband Jeff Reynolds; his daughter Amy Borchers and husband Bill Borchers; his two cherished granddaughters, Riley Robertson and Dylan Borchers; three younger brothers, Lorenzo Roybal and wife Laurie, Reuben Roybal and wife Monica, and Chris Roybal and wife Edwina; brother-in-law Gene Lopez and wife Susan, sisters-in-law Clara Padilla and husband Jimmy, and Mary Alice Osegueda; and a large, loving family of aunts, uncles, cousins, nieces, nephews, Godchildren, and friends. David was preceded in death by his parents, Antonio “Tony Green” Roybal and Celina Roybal; his sister Luella Roybal, who died as a small child; his parents-in-law, Margarito and Cleo Lopez; and his brothers-in-law, Larry Lopez, and Johnny Osegueda. David was born on May 23, 1945 in Omaha, Nebraska where his father was serving in the Army. He grew up in Espanola, New Mexico, where he graduated from Espanola High School. After attending New Mexico State University, he married his high school sweetheart, Diana (Lopez) Roybal on September 11, 1965. The young couple moved from Los Alamos, New Mexico to Albuquerque in 1969 to further their careers and raise a family. David enjoyed a long career as a supermarket Merchandising Manager and later as the Executive Director of the Rio Grande Minority Purchasing Council. He joined Diana in retirement in 2007 and together they helped care for their beloved granddaughters, Riley and Dylan. David and Diana had many fun adventures and were fortunate to travel throughout the United States and to many foreign countries. They also enjoyed several ocean cruises, as well as taking several trips with their family to Disneyland and Disney World. He enjoyed weekly breakfasts with his EHS Hornets buddies and loved spending lots of time with family. Our beloved David lived a good and honorable life and was a devoted and doting husband, dad, and grandpa. He will be loved and missed without measure forever and always. David was a man of faith who loved the Lord and a long-time member of the Risen Savior Catholic Community. May God rest his soul. Following cremation, private services will be held at a future date.

To order memorial trees or send flowers to the family in memory of David R Roybal, please visit our flower store.