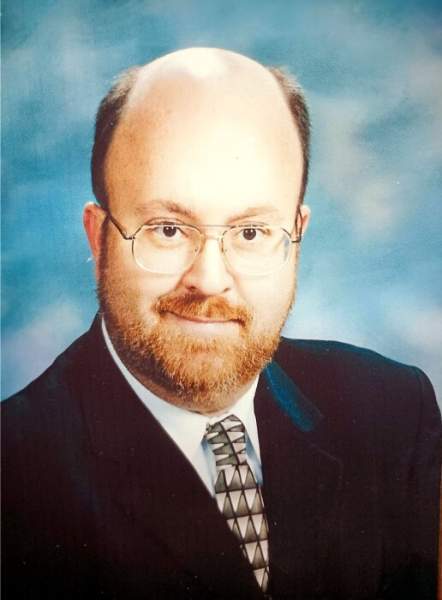 Eric Maddy, a well-respected journalist and entrepreneur in the Albuquerque area, has died in his sleep on March 31, 2022. He was 59.

Son of Jimmy and Agnes Maddy, Eric was born May 24, 1962, in Wilkinsburg, PA. He moved with his family to Albuquerque in 1970 where he attended Sombra del Monte Elementary, Madison Middle School, and Sandia High School. He excelled in school politics and served as junior class president. After graduating in 1980, he earned a bachelor's degree from the University of New Mexico and was a lifelong Matador and Lobo aficionado.

While in college, Eric worked at the Daily Lobo in multiple roles: night editor, news editor, sports editor, and reporter. He continued his career as a news and sports reporter at several newspapers throughout the west, including United Press International, the El Paso Times, and the Santa Fe New Mexican, among others. Of all the articles he wrote, he was most proud of a 1986 interview he scored with legendary NFL Coach Don Shula, then-coach of the Miami Dolphins.

His journalism career, which began when he started writing in seventh grade for the Madison Drumbeat, totaled more than 46 years. His colorful career took him north to Idaho Falls and east to Amarillo, and his great skill in storytelling left him with an appreciative fan base and numerous friends. Eventually, he decided to pass his expertise on to the younger generation and taught high school journalism in west Texas.

In his early 40s, Eric returned to the Duke City to be near his family. His health began to decline shortly thereafter, limiting his career options, so he served as a substitute teacher in the Rio Rancho School District. He also created New Mexico's first completely online newspaper, The SCORE (Sandoval County Online Reporting Enterprise), and provided a welcomed local service by reporting city and county government news and sports, along with occasional editorials.

Most recently, Eric was able to combine his passion for journalism and his love of teaching with his involvement in the Daily Lobo Alumni Chapter, where he worked with Daily Lobo students in the Mentoring Network and presented workshops on journalism basics and interviewing skills. Eric took great pride in the work the Alumni Chapter was doing and in 2019 was chosen as chair. In this position, he also chaired the Hall of Honor committee in its inaugural year of such awards. Ever the journalist, he was working on a deadline for this project when he laid down for a nap, not realizing his own personal deadline had arrived.

Even though he left the east coast at a young age, his roots remained an integral part of his personality. He was fiercely loyal to his family and loved hunting, fishing, and spending time, whenever possible, on the family farm in West Virginia. He carried the successes and failures of Pittsburgh’s professional sports teams – Steelers, Pirates, Penguins – with him. Eric had a collection of clothing representing those teams, and he wore them proudly.

Life was never dull when Eric was in the room. For example, he had developed a cluster of nearly 200 ties and was proud to share the unique story behind each one.

Eric will be remembered for his dry sense of humor, for his zeal and integrity in news reporting and, of course, for his opinions. He had a quick wit and a sharp mind; he knew the power of words and used them well. Among his treasured books were five dictionaries and six thesauri. Having lived the life of a consummate journalist, he leaves behind not only a legacy of honest, well-researched articles but also the love and admiration of many colleagues, friends, and family.

Despite his many friends, Eric never married. He was preceded in death by his father, Jimmy, who passed away in 2019. His living relatives include his loving mother, Agnes; his "little" sister, Coleen; his canine nieces Daisy Mae and Crosby; his canine nephew, Tanger; and many human aunts, uncles, and cousins across the country.

A rosary and requiem Mass will be offered for the repose of Eric's soul at 10 a.m. on Tuesday, April 26, 2022, at St. Thomas Aquinas Catholic Parish, 1502 Sara Rd. SE, Rio Rancho, NM, 87124. His ashes will be interred in a private family service at Vista Verde Memorial Park.

To order memorial trees or send flowers to the family in memory of Eric Maddy, please visit our flower store.