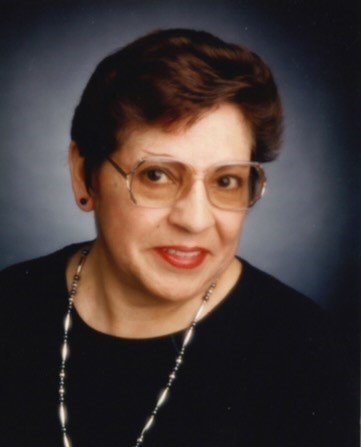 Felicia Romero Steinberg was born in Llano Largo, New Mexico on January 23, 1932. At an early age Felicia lost her mother and went to live with her maternal grandparents in Cordova, New Mexico. Upon completion of the 8th grade Felicia moved back to Llano Largo to attend high school in Penasco. She enjoyed learning and would often speak about her classmates and the Nuns who taught school. Upon graduating high school, Felicia moved to Santa Fe, New Mexico, where she worked for the New Mexico Department of Transportation. She loved her job and all the friends that she made. She eventually moved to Albuquerque to attend secretarial school. After leaving secretarial school she obtained a job at Zale’s Jewelers, where she

met Leo Steinberg, who was a salesperson. Leo and Felicia married in the summer of 1959 at St. Charles Catholic Church in Albuquerque, New Mexico. Shortly after their marriage the couple resided in Farmington, NM. After a brief time in Farmington the couple returned to Albuquerque where they bought a house and settled down in the North Valley. In the autumn of 1962, the couple welcomed their first child, a daughter, Angela. Two years later they welcomed their second child, a son, Edward.  Felicia and Leo were blessed with four grandchildren, Carlos, Jocelyn, Jovana, and Arielle, who were their greatest joy.

Felicia loved to tell her grandchildren stories about her childhood, her time in Santa Fe, and her work at Zale’s Jewelers. Since childhood Felicia loved fishing.  She frequently talked about her fishing adventures with her nieces, who she took along to untangle her fishing line and dig up worms to use for bait (she had all the fun and they did all her dirty work). She liked to talk about the native cutthroat trout she would catch in the streams around Northern New Mexico.  She introduced her grandchildren to her hobbies of stamp and coin collecting. She also enjoyed working in her yard. Her favorite hobby was gambling, whether it be horse racing, playing cards, scratchers or slot machines. Anywhere there was a casino, she was happy.  She loved playing bingo, and every evening she would go to the local bingo hall, often accompanied by her niece, Teresa. Felicia would tell her family all about the fun they had playing bingo and how she and her niece would chase people away from their table because they didn’t like to share a table due to all the cards, bingo markers, and snacks they had. If you haven’t figured it out yet, her favorite vacation spot was Las Vegas, Nevada, where they often vacationed.  They also traveled to New York, where Leo was from, to visit with family and occasionally traveled to Florida to meet up with Leo’s sister. She also enjoyed discussing politics, reading, watching game shows, doing word searches and crossword puzzles.

She is survived by her daughter Angela and son- in- law Alex Garcia; son Edward and daughter- in- law Cynthia Steinberg. Grandchildren Carlos and wife Melissa Garcia , Jovana and husband Jacob Key, Jocelyn Garcia and Arielle Steinberg. She is also survived by brother Pablo Romero; brother Miguel and wife Doris, and Policarpio Romero and wife Juanita. Additionally, she is survived by numerous nieces and nephews.

In May 2021, Felicia welcomed her first great-grandchild, Josephine Marina Garcia; daughter of Carlos and Melissa.  Her second great-granddaughter is expected in January 2022 (Jovana and Jacob Key).

Felicia left this earth on September 20, 2021, on her own terms, and as strong-willed as she came into this world.

To order memorial trees or send flowers to the family in memory of Felicia Sofia Steinberg, please visit our flower store.