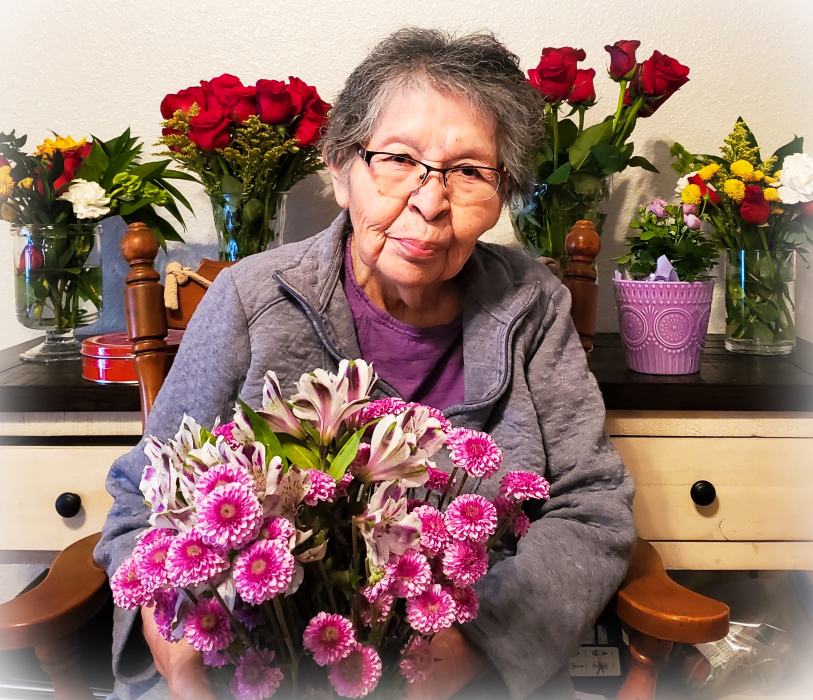 After enduring years of progressing dementia related to Alzheimer’s, Lena Wiley died peacefully at home with her family on Monday, September 13, 2021 in Rio Rancho, New Mexico. Lena Wiley was born on September 25, 1940 in the Hopi Village of Bacavi, Arizona to James and Frances Chimerica. She graduated from Haskell Institute in Lawrence, Kansas, where she met her husband, Frank Wiley Jr. They married on December 2 nd , 1961 in Oakland, California and raised three remarkable children Dorinda, Michael, and Frank. The family resided in Hayward, California. Lena worked as a computer operator at Sysco Distributions before retiring in 2000. In the new millennium, Frank and Lena made the decision to be closer to their three grandchildren Jeremy, Miquelina, and Evangeline Bradley and migrated to Rio Rancho, New Mexico. Lena caringly lived near her family with her husband until his passing in March 2014. They achieved fifty-four years of marriage and on their 50th anniversary, they renewed their vows in Maui, Hawaii. Lena Wiley was kind, compassionate, and good humored. Lena was very amiable and devoted to her faith as a Catholic Christian and loved to sing at mass. She enjoyed spending time with her close and extended family in New Mexico and Arizona. Lena was often mistaken to be the mother to her grandkids instead of their grandmother at public sporting events where she played the role of cheerleader and coach. She reveled in the enjoyment of the occasional visits to the local casino. In her later years, hot dogs became her favorite food. What her family enjoyed most about Lena was her amorous and compassionate spirit, along with her sensational talent for cooking delicious healthy meals (low sodium, low fat). She will be dearly missed and forever loved by her family. Lena Wiley is preceded by her parents, James and Frances Chimerica; three sisters, Laura, Frances, Ramona, one brother, Paul; and her late and loving husband, Frank Wiley Jr. Lena is survived by her three children, Dorinda K. Wiley-Bradley, Michael J. Wiley, and Frank Wiley III; her three grandchildren, Jeremy Bradley, Miquelina Bradley, and Evangeline Bradley; her siblings, Lenora Lomayaktewa and Burke Chimerica, and numerous nieces, nephews, extended family and friends. In addition, she was guarded day and night by her granddaughter dog, Sasha (little girl), who always brought a smile and sense of security to her “g-ma”. Services are planned for Lena Wiley on Friday, September 24, 2021. Visitation will take place at Daniels Family’s Southern Chapel in Rio Rancho (2400 Southern Blvd SE) from 11:00am-12:00pm. Funeral Mass will be held on September 24, 2021 at St. Thomas Aquinas Catholic Church (1502 Sara Road, Rio Rancho, NM) with Rosary starting at 1:00 pm. Burial to follow immediately after mass at Vista Verde Memorial Park (4310 Sara Road, Rio Rancho, NM). A reception will begin approximately at 4:30pm at Rio Vista Park in Rio Rancho (1650 Riverside Drive NE).

To order memorial trees or send flowers to the family in memory of Lena Wiley, please visit our flower store.