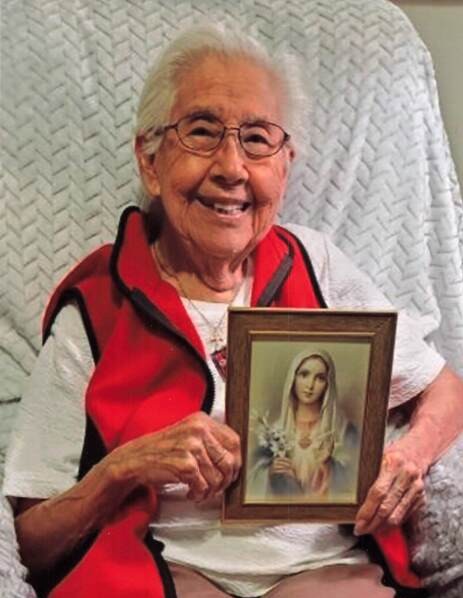 On Sunday, October 3rd, 2021, Lydia Cantu Willingham, passed away to be with the Lord.

Lydia was born in El Cerritos (Manassa), Colorado on April 3rd, 1927. She was born to Maria Eva Cisneros and Jose Candido Cantu. She lived there until she was 5 years old. Her and the family then relocated to Taos, New Mexico where close relatives resided. Lydia moved to California in 1944 and worked as a telephone operator for the telephone company in Oakland, California. There she married the late Frank Hernandez and had two sons, Jerry in 1951 and Arthur in 1954. Lydia moved to Sacramento, California in 1963 to raise her two sons and to be close to her sister, two brothers and their families. She remarried in 1966 to the late Neal Willingham. She worked for the Blue Diamond Almond Plant from 1967 to 1992 when she retired. Lydia then began volunteer work at Sacramento Food Bank for 9 years until 2001. She then relocated to Rio Rancho, New Mexico in 2001, to be close to her grandchildren and relatives in Santa Fe and Taos.

Lydia became a member of Incarnation Parish where she spent countless hours in deep prayer and service. She was very devout in her catholic faith. Lydia made many close friends while a member at Incarnation Parish. She was also a member of Catholic Daughters at Our Lady of Sorrows Parish with her daughter-in-law Martha. Lydia was loved by many.

Other activities of Lydia’s included many hours volunteering at St. Felix Food Pantry. She was also extremely active in Pro-Life Causes including many marches and rallies no matter what the weather conditions might be. Her interests included fishing for salmon in California for many summers with her late husband Neal. Lydia also enjoyed canning salmon and albacore, as well as several other crafts. She enjoyed family gatherings with her children, grandchildren and great-grandchildren as well as numerous lunch and dinner outings with her loving friends from church and elsewhere.

Lydia was preceded in death by her late husband Neal Willingham, brothers Luis, Carlos, Alfonso, Jose Candido and Ruben, Sisters Mary Martinez and Emma Esquibel, great grandson Gavino Hernandez III, and by numerous nieces and nephews, all of whom she loved so dearly.

To order memorial trees or send flowers to the family in memory of Lydia Cantu Willingham, please visit our flower store.