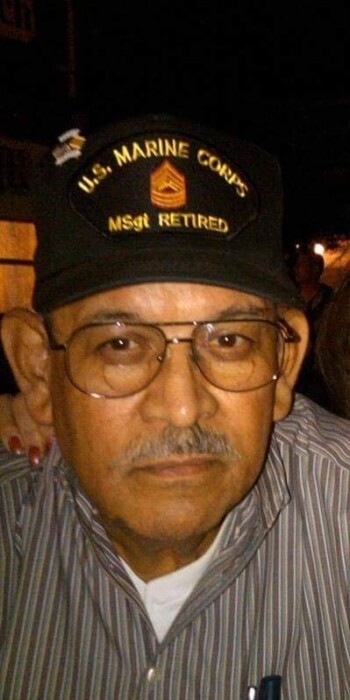 Mariano Aguirre, age 76, beloved husband, brother, uncle, godfather, and friend, was embraced by our Lord on Friday, December 3, 2021 and taken to his heavenly home.

Mariano was born in Temple, Texas on April 9, 1945. To many who were touched by his loving heart, Mariano was fondly known as: Mario, Tio, Uncle Nano, Konkle, Nino, and Jefe.

Mariano was a very proud Veteran who served his country in the United States Marine Corps during the Vietnam War Era.  Mariano earned numerous accolades, to include the Purple Heart and Navy Commendation Medals.  Mariano flew over 300 helicopter missions over Vietnam. He retired in 1982 and made New Mexico his home.

After his military retirement, Mariano pursued a second career with the Albuquerque Sunport, where he was a terminal manager.  After 23 years of service, Mariano enjoyed a second retirement from the City of Albuquerque in 2004.

Education was of significant value to Mariano.  During the span of both careers, he attended Embry Riddle Aeronautical University (ERAU) where he earned his master's degree.  He then became a professor at ERAU and taught aviation courses for many years.

True to his nature of faith and duty, Mariano served as an usher at his beloved Nativity of the Blessed Virgin Mary Catholic Church for many years.  He also volunteered with AARP preparing taxes and worked the voting polls during elections.

Mariano's favorite pastime was going with his “Vieja” and friends to the casino, almost always having good luck.  Mariano had a special place in his heart for dogs and always had a small fuzzy canine companion or two by his side.

It is with great appreciation that we thank the following for providing exemplary care of Mariano: UNM Family Practice Clinic – Dr. Berthold Umland (retired), Dr. Robert Williams; the staff of the Nephrology & Transplant, Pulmonary, Endocrinology, and Cardiology clinics at UNMH; Dr. Joshua Solomon and staff at the National Jewish Health Center in Denver, and Kindred Hospice.

Due to the current situation with COVID-19, a reception will not be held after the Mass. Also, we respectfully ask that masks be worn by those who attend during the entirety of all services.  For those with health concerns, services will be streamed via YouTube:

To order memorial trees or send flowers to the family in memory of Mariano Aguirre, please visit our flower store.