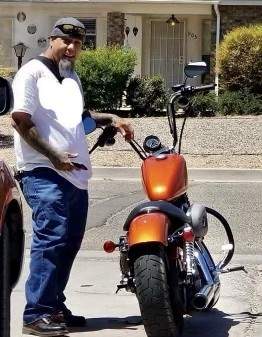 It’s how Mateo ended conversations with his mom, whether it was a live chat or a comment on a Facebook post. Mateo expressed his love similarly to family members and friends, never wasting an opportunity to remind them they were loved. Mateo Ricardo Duran, 44, died unexpectedly on Aug.4, 2021.

Mateo’s life is remembered by one unifying theme: his passion to help others. A pillar and advocate in the addiction and recovery community, Mateo mentored and guided many — some friends and some strangers — through the everyday difficult process of becoming and staying clean. He literally held their hands to Narcotics Anonymous meetings where he was a facilitator.

He was dedicated to daily NA meetings, never losing the perspective that he needed the human interaction as well. He himself had been clean for 8 years, a milestone he celebrated yearly by posting a remembrance on his Facebook page. It was not a way to bring attention to himself, but to serve as a motivation to others fighting the daily struggle. If he could do it, anyone could. “I’m humbled and truly honored to live this life,” he often said about being clean.

Recovery was Mateo’s calling, whether that was working at treatment facilities, facilitating NA meetings or personally reaching out to recovering addicts. To be involved in others’ recovery was integral in his own journey. He used his personal experiences to relate to others. He was excellent at listening, encouraging and advising.

“Those were tough love talks,” he said. People speak of his empathy because he knew their pain all too well.

Mateo’s story continues to be an inspiration to his recovery family who will miss his friendly banter about the struggle. About motorcycles. About fishing. About his own family. About his beloved dog Tank. And about his Higher Power. Mateo loved God.

He wore his emotions on his sleeve, never shy to share details about his long addiction to heroin, life on the streets and homelessness. He talked about his rough side to television stations and newspapers, to bring light to addiction and mental health.

“It was life or death,’ he said in a touching video that went viral in 2019 where he gave intimate details of his story. “Either go to prison or get clean,” he said. He was upfront about bad choices, never mincing words. And, of course, he shared his triumphs to motivate others. “To give people hope and that their lives mean something,” he said.

“He was a realist,” a friend said.

Kelli Allen, who was part of Mateo’s Narcotics Anonymous family, said this about legacy in a Facebook post. “A lasting legacy is all about the actions you take during your life and the way those actions affect how people will remember you,” she said.

After news of Mateo’s death spread, she went to Facebook where she saw the outpouring of love for their brother. “What I saw was Mateo’s legacy,” she said.

“We, who remember all the ways he struggled, got back up, fell down again, and moved on and became who God chose him to be, well I was thrilled that I knew him and was part of his legacy,” she said.

Others in his recovery family wrote about the impact Mateo made on in their lives. Lasheka Trussell said, “You were a bright light in this dark world...even through the struggles.”

Marissa Vee said, “You took me to meetings and helped me with my struggle. You were an amazing advocate and huge inspiration to me and many others.”

Lawrence Marianna said, “Every time I saw you made sure to tell us before we left that you loved us and to be safe.”

Juan Marquez got to the point: “You saved my life.”

Yes, Mateo lived an imperfect life but he faced it head on, embracing his mistakes as lessons for others.

He was a certified peer support worker, with a counseling certification he was most proud of. He connected with his 13-year old son Josiah in recent years and boasted often of his “little vato” who looks incredibly like his father.

And he became a spokesman for the recovery community in Albuquerque. The media sought his insight into how the pandemic affected addicts seeking help. And Mateo was eloquent in his message that addicts were people whose lives had value. He stressed that more resources were needed to address their needs.

We will miss you Buffalo Head. You've done good work and been one of God's soldiers. Rest in peace.

To order memorial trees or send flowers to the family in memory of Mateo Ricardo Duran, please visit our flower store.