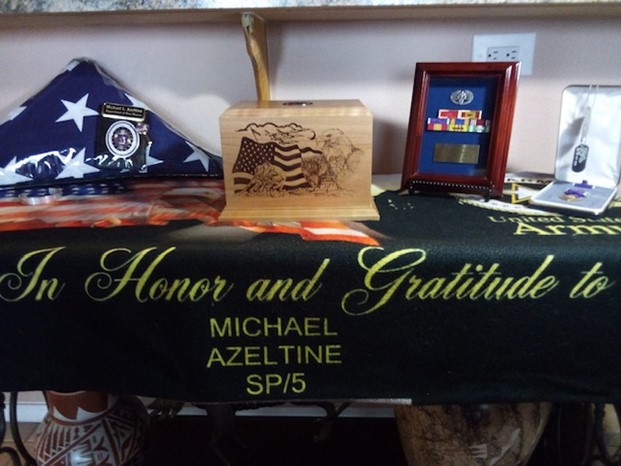 Mike was born and raised in San Francisco, California, and spent some of his infancy and toddler years with his maternal grandparents in El Salvador.  He was the oldest of the five children of James Matthew Aseltine and Anna Marie Campos.  At Star of the Sea grammar school in San Francisco, Mike performed the prisyádka (Russian squat and kick dance).  A family story is that once Mike laughed so hard at his uncle's stories during family dinner that he cracked the back of his chair.

During his high school years, Mike drummed with Carlos Santana in a garage band, and mastered drumming "Wipeout".  He graduated from George Washington High School, San Francisco on June 15, 1967.

In keeping with family tradition, Mike enlisted in the US Army soon after he graduated from high school.  His enlistment occurred at the height of the Vietnam war, on August 14, 1967.  His military occupational specialty was Medical Specialist, within the Army Medical Service.  Between February 20, 1968 and February 24, 1969, Mike served in Vietnam, where he was promoted to the rank of Specialist Fifth Class (E-5) on December 14, 1968.  Mike was wounded in combat, for which he was awarded the Purple Heart.  He also earned an Air Medal, as well as the Vietnam Campaign Medal and the Vietnam Service Medal.  Following his tour in Vietnam, Mike went on to serve in Germany.  He was honorably discharged on June 12, 1970.

Following his Army service, Mike became very active in Veterans organizations in California, Arizona, and New Mexico.  He was not only a member of the Disabled American Veterans, Veterans of Foreign Wars, and the Military Order of the Purple Heart, but he also held various offices in these organizations.  In particular, he had a soft spot in his heart for homeless Veterans and Prisoners of War.  Mike’s own paternal grandfather of the US Marine Corps was captured by the German Army in France during World War I, and Mike was particularly devoted to his memory. Private Ray M. Azeltine, USMC Company E 5th Marine Regiment, was a Prisoner of War between April 19 and December 8, 1918.

Mike spent most of his career in the automobile industry in California and Arizona.

Mike was an exceptional bowler, with several 300-point games.  He was a music aficionado, with a huge collection of vinyl albums and compact discs.  He loved dogs, and nurtured hundreds of bushes and trees in his lifetime.  He was an accomplished cribbage player, storyteller, and trivia buff, as well as a voracious reader of novels of the American West.  Mike particularly enjoyed traveling by car and train.  His personality was defined by his generosity and geniality.   He loved his extended family, home, pets, and garden.

Mike led a good life.  He died peacefully at home in Rio Rancho, New Mexico.  Memorial services for Michael L. Azeltine are being planned in New Mexico and California.

To order memorial trees or send flowers to the family in memory of Michael Leigh Azeltine, please visit our flower store.