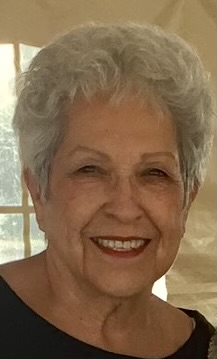 Rosalie was born on July 6, 1939 in Trinidad, CO to Solomon and Ercilia Lujan. She attended high school at St. Mary’s High School in Albuquerque, New Mexico. On March 19, 1960 in Albuquerque, NM she would marry the love of her life, Edward J. Dion. They were married for 35 beautiful years.

Rosalie worked for the telephone company, Mountain Bell, U.S. West for over 25 years. She later retired as a supervisor in 1992. She was a dedicated member of Church of Incarnation in Rio Rancho, NM. She was also a member of St. Vincent De Paul Society and Red Hat Society. She will be greatly missed by her family and friends.

Thank you to all of Rosalie’s friends at the phone company, Church of Incarnation, St. Vincent De Paul Society, and Red Hat Society, for making her life complete. She loved all of you dearly.

Yea, when this flesh and heart shall fail, and mortal life shall cease, I shall possess, within the veil, a life of joy and peace.

A rosary will be recited on Saturday, October 16, 2021 at 9:30 am with a mass to follow at Church of Incarnation, 2309 Monterrey Rd NE, Rio Rancho, NM 87144. A private burial will take place at Mount Calvary Cemetery.

To order memorial trees or send flowers to the family in memory of Rosalie Dion, please visit our flower store.