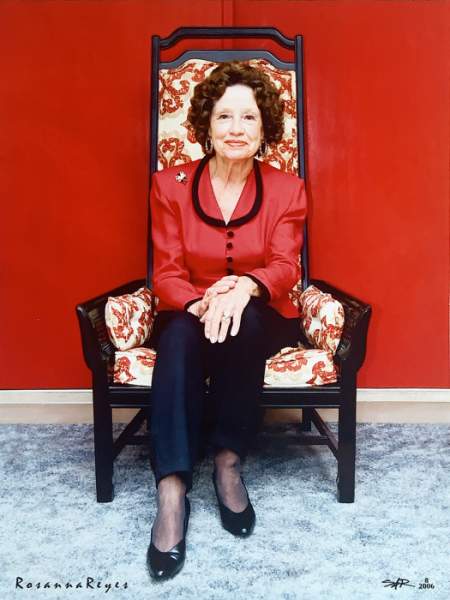 Agnes “Rosanna” Reyes died peacefully at home in Albuquerque, New Mexico on March 26th, 2022, at the age of 94 years.

Rosanna was born on October 25th, 1927, in Los Angeles, California and was adored as the only child of John Leverman and Agnes Strube Leverman.  As a teen, Rosanna took care of her beloved father while her mother worked long days for the railroad.

After graduating from high school, Rosanna married Gonzalito Perez “G.P.”  Reyes who had recently returned home after serving in the Marine Corps. They moved into a small two-bedroom house in Waco, Texas with G.P.’s three brothers, two sisters and his parents.  G.P.’s grandmother and parents only spoke Spanish, so Rosanna embraced learning the language and won over the entire clan as they recognized how hard she worked to truly become a member of the family.

G.P. and Rosanna moved to Albuquerque in 1953. While G.P. built his career, Rosanna lovingly raised 3 active children and took care of the household. In her later years, she would dote on her grandchildren and spoil them with her homemade cookies. Today, her family is convinced that her chocolate chip oatmeal cookies and biscochitos are from heaven.

Rosanna had a special passion for gardening and helping others. She loved Japanese culture and gardens and created a Zen Garden of her own in their backyard. She would spend hours in the yard tending to her numerous flower beds and cursing the multiple pine trees that dropped needles everywhere and her neighbors’ cats who left ‘surprises’ in her garden. She also was active in Al-anon and helped counsel others for years.

Rosanna had a keen mind, a laugh-at-life sense of humor, and a deeply held faith. She was an active member of Our Lady of Annunciation Parish in Albuquerque for close to 60 years. She was supportive of her husband when he served on the Annunciation committee that built the current church.

Memorial Contributions can be sent to Roadrunner Food Bank in Rosanna’s memory.

To order memorial trees or send flowers to the family in memory of Rosanna Reyes, please visit our flower store.