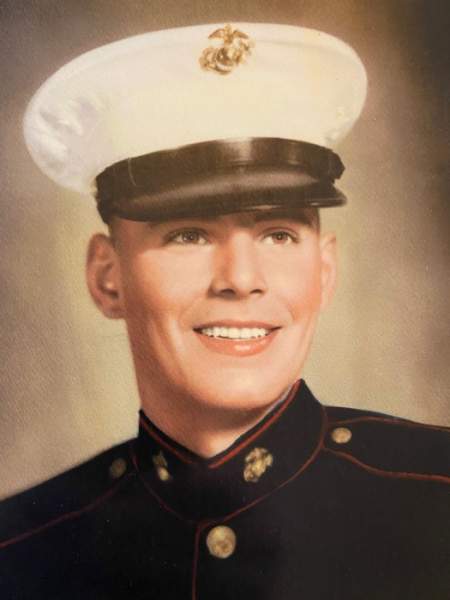 We didn’t know that morning that God was going to call you home. William “Bill” A. Last was born in Iowa Falls, IA. on August 23, 1938. Bill was raised on a farm with hearty mid-west values and learned that one had to work hard to accomplish their dreams.

After graduation from Hubbard High School in May of 1956, Bill worked at Iowa Limestone and then moved to Minnesota in September of 1957 to work at the taconite plant near Hoyt Lakes.

In May of 1958, Bill joined the U.S. Marine Corps and proudly served on active duty for 3 years followed by another 3 years in the Marine Corps Reserve.

After his release from active duty, Bill spent 2 years attending Ellsworth Junior College and 1 year at the University of Iowa. Bill also worked various construction jobs, but ultimately, he decided to look for a job out west.

His search led him to Albuquerque where he met a city police officer on First and Central and this officer encouraged him to consider a job with the police department. Bill liked the idea and returned to Iowa saying he was going to be a policeman in Albuquerque and moved in October of 1964. Upon graduation from the police academy in 1965, Bill eagerly served in several divisions, one of which was Homicide and the last couple of years before retirement; he served as a Station Commander. While serving, he attended night school at the University of Albuquerque and received his B. S. in Criminology in May of 1977. After completing 20 years of faithful service, Bill retired in 1985 at the rank of Lieutenant.

After retiring from the police department, Bill served as a background investigator at the Los Alamos National Laboratories for 3 years. His final law enforcement position was as a Deputy United States Marshall, providing security at the Federal Court House in Albuquerque NM.

While living in Bernalillo he served the Town’s Planning and Zoning Committee. After his term expired, he became involved with the St. Vincent de Paul Society, ensuring the food pantry shelves were always filled with food and other items needed to serve the needy people in our community. Bill was also heavily involved in establishing the Del Norte Gun Club and served as the club’s treasurer/training administrator and as an NRA certified instructor.

Bill finally decided it was time to devote more time to projects around the house and he enjoyed trains, cooking his favorite dishes, watching westerns and detective movies. Bill thoroughly enjoyed his retirement years to the fullest.

Bill was preceded in death by his parents, Henry and Doris Last and brothers, Robert Last and Larry Last.

Bill was an honest man that was respected and admired by his family and friends. Everyone that knew him knew he was the kind of person that “what you see is what you get”, there was no pretenses about him.

Bill was truly a blessing to his entire family and friends. It has broken our hearts to see him go from our lives. But we truly believe that Bill is in a better place, where there are no more tears, no more pain and no more goodbyes. Bill, go with God, knowing that as long as you live in our hearts, it is not to die.

A private service will be held at a future date.

In memory of Bill, donations may be made to St. Vincent de Paul Society, in care of Our Lady of Sorrows Catholic Church, PO Box 607, Bernalillo NM, 87004.

To order memorial trees or send flowers to the family in memory of William Arthur Last, please visit our flower store.