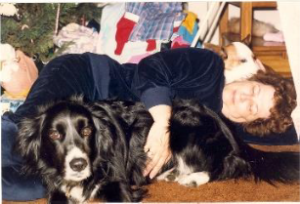 Polly was born in Claremont, New Hampshire December 9, 1931, to Gladys and Stanley Clark. Polly and her family moved from New Hampshire to Rhode Island in 1940. Her dad was hired to work on the Manhattan Project and came to New Mexico.

Polly and her mother joined her father in Los Alamos in 1944. Polly graduated from Los Alamos High School in 1949. During high school, she was elected 1948 Homecoming Queen which was always a fond memory for her.

Polly began her career with the Los Alamos National Laboratory as a part-time student in 1948. She spent most of her career as a secretary for GMX-3. In 1994 she retired from LANL as an Administrative Assistant in the Conventional Defense Technologies group after 45 years of service. After Polly retired, she moved to Rio Rancho, New Mexico in 1996.

Polly married Bill Siverly in 1961. They had 2 daughters, Cindy and Sherri. After Polly moved to Rio Rancho, she met and married Dan Bravine in 1999.

Polly was involved in many activities over the years. She was active in the Rainbow Girls, Eastern Star, Women’s International Bowling Congress, Los Alamos Golf Association, The Elks Lodge, Los Alamos High School Alumni Association, an usher for Popejoy Hall, Musical Theater of the Southwest, Landmark, and a greeter at Presbyterian Hospital. Polly also went on several cruises and international trips including Hawaii, Greece, Turkey, and China. Polly also loved dogs, dancing, shoes, camping and boating, The Dallas Cowboys, reading, and crossword puzzles. She also enjoyed playing cards with friends and sometimes her family until they all started cheating! Polly also loved dark chocolate. In the last few months, she did something that we all talk about doing, and she insisted on eating dessert first at all her meals.

Polly is survived by her daughters Cindy Hollabaugh (John) and Sherri Dudley (Mark). She is also survived by her grandchildren Mark Curnutt (Annie), Kimberly Malloy (Kyle), Amy Hollabaugh, Taylor Dudley (Dana), Dylan Dudley, 2 great-grandchildren, and 9 granddogs.
Our family would like to thank the caregivers at Autumn Glow and La Casita Senior Living for the care they have provided Polly in the last 2 years.

A memorial service will be held at a later date.

In lieu of flowers, the family encourages you to make a donation in Polly’s name to your local humane association.

To send flowers to the family or plant a tree in memory of Pauline (Polly) (Clark) Siverly Bravine, please visit our floral store.

You can still show your support by sending flowers directly to the family, or by planting a memorial tree in the memory of Pauline (Polly) (Clark) Siverly Bravine
Share a memory
© 2022 Daniels Family Funeral Services. All Rights Reserved. Funeral Home website by CFS & TA | Terms of Use | Privacy Policy | Accessibility